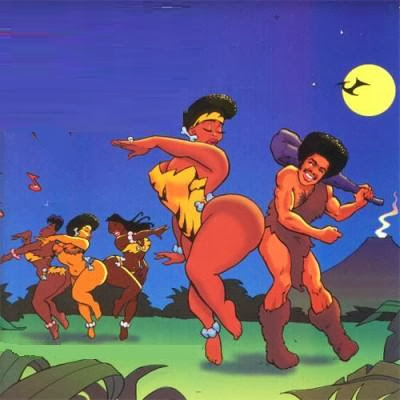 There’s this bit of news that has been circulating which is bound to bring a smile to the faces of women with a big behinds – the news of a discovery that women with big butts are healthier and smarter. I came across the information on another website and it got me into deep thought.

I used to marvel at big butts and think they were a sexy joke played by nature on women. But after being in a few relationships with carriers of this ‘derriere de magnificent’, I’m sort of thinking that what this research says may have some truth in it.

But then we shouldn’t get it twisted because a lot of people will get deceived by manipulation of this info and the facts of life on ground.

If a big behind makes a woman smarter, then we should be wary of women with fake behinds; I’m not talking of people wearing butt-pads alone but the ones that get butt implants. This category of ladies unfortunately are like a paradox to what this research says. Their decision to get big ‘nyansh’ is not motivated by smart thinking but a feeling of insecurity and complex. Also, its not a healthy thing to do; rather than be smarter and healthier, you are making a stupid decision and endangering your health.

Those with inflated derrières have lower insulin resistance, and they produce hormones that better metabolize sugar — which means these women are less likely to develop heart problems or diabetes than women who carry extra weight around their stomachs. These women also tend to have lower cholesterol; and they tend be smarter, because they produce more Omega 3 fats, which mobilizes brain development.

Researchers indicate that fat in the lower body is preferred to fat anywhere else throughout the body. Dr. Michael Jensen, director of endocrine research at the Mayo Clinic in Rochester, Minn. stated that the fat of pear-shaped women behaves in healthy ways, and that the public should think about fat “as an important organ for our health.”

“It is the protective role of lower body, that is [thigh and backside] fat, that is striking. The protective properties of the lower body fat depot have been confirmed in many studies conducted in subjects with a wide range of age, BMI and co-morbidities,” ABC News said, quoting the Journal of Obesity.

Dr. Robert Kushners, medical specialist in obesity at Northwestern Memorial Hospital, clarified that fat in the stomach is “more metabolically active,” therefore harmful, while fat in the lower regions may be more stable.

Okay. Let’s do a small roll-call of popular women with big butts and find out if they are really smart.

Can we then say that that Jennifer Lopez is smarter and healthier? Maybe she is with the way she delved from music into movies and also established her own business of perfumes amongst others.

What about Kim Kardashian? – Unless she had ‘nyansh’ implants then I’m not buying the theory. Apart from having a baby, I’m still yet to discover any smart thing she has done.

Big bottomed Tolu Oniru aka Toolz of Beat FM is no doubt a smart woman ’cause it shows in her personality and the way she handles matters on air.

Omotola Jalade-Ekeinde has also proven beyond doubt on a grand scale that bigger butt equals bigger brain with her all her achievements.

These are just a few out of a number of celebrities who are ‘nyansh’ representing.

All those video vixens in music videos flaunting their behinds nko? Let’s not be deceived; there’s a lot of fake butt (implants) as mentioned earlier to ply the trade.

I have met women with big butts that are really smart – like some of my female friends, three of my female colleagues in the office, a family friend etc.

I’ve also come across women with gracious butts that have been seriously stupid with their choices in life and fail to exhibit any form of smartness.

Is it that the smartness is there but they are refusing to manifest it?

The only conclusion I can give is that any woman with big butt who is not smart or healthy, something is wrong somewhere.