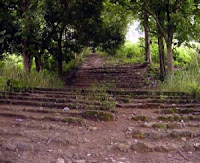 A bent-over, rounded female was the first thing he saw once he entered the clearing, as the owner arched her back, about to dive into the Olumirin pool. Babs walked closer, bounced once on his toes, and then settled into the heels of his hiking boots to fully take in the most perfect backside he had ever seen. And he knew what he was saying because he’d seen a lot. She splashed in, surfacing in a strong crawl. The tight shorts she wore barely covered her hips and clung like a second skin. Sunlight glinted off the water on her long and lean limbs as she moved effortlessly through the pool. The other people splashed around the banks of the pool, or took pictures of each other on the rocks around but they couldn’t keep his attention.

Folarin came over and they shook hands but Babs didn’t say much and soon, the other guy went to chat with the couple that had straggled in after him. Babs was standing in the same spot when the swimming lady waded out, rivulets of water of sluicing off her narrow shoulders and hourglass waist. He swallowed the lump that climbed his throat and cleared it loudly in order to get her attention. When she glanced over at him, he flashed his best smile. He’d always found it easy to get the girls he wanted and walked towards this one without thinking twice about it. Women were quickly charmed by his looks and what some of them called his confidence.

By the time he got to her, she had stepped into tan knee-length khakis that did nothing to camouflage her divine figure. “Hello, how are you?”

She eyed him then turned away to pick up the top lying on a grass-covered rock, shrugging into it without a word. Was she ignoring him? He stuck out a hand and smiled more widely. “I noticed you’re a very good swimmer.”

His smile faded a bit as he watched her eyebrows climb her forehead. After a couple of seconds, he let his hand drop. She’d half turned away as if looking for something, or someone. Had he made a mistake and she was coupled up? But she didn’t look familiar, and he could’ve sworn he knew all the people in this group. Babs looked around again, and saw Paul staring at them both with a strange expression in his eyes. Was that a smile? Had his colleague got to her before him? He looked back at the still silent woman. Why doesn’t she just say so?

“Are you deliberately being rude?” He asked finally.

“You mean rude like the lecherous look on your face as I walked out of the pool?” Her reply took him by surprise, and before he could formulate an answer, she shot another volley.

“And how long were you standing there with spit dribbling down your slack jaws?”

Babs laughed inwardly. She sure had a smart mouth on her. And he noticed her American accent. She must be visiting and what could be better than a tourist romance? Well, he wasn’t one to back down from a verbal sparring, it was all part of the fun as far as he was concerned.

“Cat got your tongue?” She taunted, following it up with a drawn out hiss. “F-o-o-l!”

“How dare you!” Babs hissed back, the smile wiped from his face.

Her almond shaped eyes had gone wide and he wondered if it could go wider still. After the sting of her insult, the fun was coming back to their exchange and he wanted to see how much further he could needle her.

“You need to wash out that mouth of yours with soap. You’re acting like a spoilt child.”

“You, s-i-r-,” she rolled her eyes at him, “are the spoilt child here, acting like you’ve just seen a new toy and can’t wait to get your grubby hands on it. I won’t be surprised to find you have a couple of wives at home, and several mistresses too.”

“Sorry to disappoint you,” he laughed, “I am very much unmarried. You see, I love women too much to deny them of myself.”

Babs felt charged up, his heart chugging away in his chest like the trains his company planned to put on Lagos rails.

“So, yes, I’ve had my fair share of girlfriends and mistresses,” he continued, smiling at the memories, “I have to say though; in all my years, I’ve never seen a backside to rival yours.”

“How dare YOU!” She hissed, her eyes snapping a fire that flickered electricity over his skin. He could see her jaws tense as her fists clenched. Boy, did she have a temper. As she stepped closer to him, he saw she was almost as tall as his six feet. He wanted to reach out and touch her, and he also realized that he really wanted to know her name.

Barely managing to keep his hands by his sides, Babs sighed theatrically. “We can stand around here daring each other, or you could tell me your name?”

“Dunni, are you OK? What’s the problem?”

Babs allowed a smug smile to spread over his face, and watched her, Dunni, close her eyes as if in pain. She quickly opened it to glare at Folarin who had just joined them, and then at Babs. He could guess at the colorful words running through her head, and probably letter by letter, but she remained silent, only picking up her backpack and slinging it behind her.

Babs swallowed his laughter at being proved right and watched her straight-backed march through the grasses as she stalked away. She might have been trying to control the sway of her hips but they had a mind of their own, and he couldn’t tear his gaze away.

“She’s my cousin, you know?” Folarin’s voice called him back to where he was standing. “She’s just visiting from the US and I don’t want anything to spoil her trip.”

“Relax, Folarin. We’re all adults, and your cousin is very beautiful. Trust me, I’m not going to spoil her visit or anything else. Not unless she wants me to.”

So what do you say? Did the characters grab you, do they feel real and do you want to keep reading? Remember, Feedback, feedback, feedback. What did you not like, and could do without?

_ Picture from www.naijatreks.com. Folarin, the tour guide and Dunni’s cousin, is also named for the owner of the Naijatreks blog, parts of which inspired some settings in this WIP.