Humans on earth wish for a thousand and one things – fast cars, wealth, money, fame, the Forbes list to mention a few – and if wishes were horses, we would be riding high on chariots. However, there is only one thing every human on the face of this earth would never wish for. Accidents.

When the ill-fated Titanic sailing on the ice-cold Arctic Ocean in the dead of night hit an iceberg and sank in 1912, leaving behind over 5,000 dead bodies at sea and many thousands still missing today, no one ever saw it coming. No one ever wished for it.
When Osama Bin Laden’s troop of Al Qaeda terrorists hijacked two planes and deliberately slammed them head long into The World Trade Centre and The Pentagon in 2001, leaving behind a trail of over 3,000 dead bodies, no one envisioned such monstrosity.
In 2005, when the Sosoliso Airlines flight 1145 DC-9-32 crashed to the ground from 30,000 feet up in the air, leaving behind 108 unfortunate souls who are now 6 feet under, no one ever imagined that this could happen in Nigeria. It did happen.

When accidents are about to happen, there are no telltale signs, no preparations, no excuses and sometimes, no warnings. As surely as it takes a split fraction of a micro-second to blink the eyelids is as exact as the time frame for an accident. When this happens, the gruesome results spans dented and badly squashed cars, spilled blood from bodies strewn carelessly on the ground, news reporters scuttling about with camera men for headline reports and the godawful shrieks of witnesses, some of who could not miss the moment of recording live photos and videos streamed across the internet for public viewing from smart phones.

All it took was a split fraction of a micro-second to witness a highway accident. Death on a highway 101.

The Monday morning was so bright and promising and by afternoon, it became hot and tiresome. Having finished with my major business of the day, I left for the bus terminal and booked a ticket to a known destination 4 hours from where I was. In the wait for the loading bus to get filled up, I bid my time and got myself a snack and a drink, anticipating about this journey and getting silently agitated that prospective passengers were not forthcoming. I needed to get to this destination before night fall because I hated night journeys and impending traffic. So I ate in silence and tapped away at my phone, ignoring the local hawkers beckoning to me to buy their items as they walked past the windows of the bus.

A short while after, the bus got filled up and moved out of the park terminal at a moderate speed into the highway. I vaguely sensed a misgiving from within twenty minutes later on the highway. The bus gradually declined in speed and a traffic was slowly building up. I looked up from my phone to the stretch in front and saw a line up of cars, motorcylces, buses, trailers and trucks moving at a slow pace. I noticed the cars diverting across to the other side of the highway to form a one-way lane from the lane we were on. Looking ahead out the window, I caught sight of a deep gully that had cut into the highway lane we were on. The gully had created a scary ravine-like feature into the depth below. It was impossible for any vehicle to pass through the lane, hence the need for the diversion into a one-way lane on the opposite highway.

I shifted on my seat and turned my eyes away to the stretch ahead on the one-way lane. The sound of the crash came through like a bolt of lightening strike and corresponding thunder rumble through the clouds. In the twinkling of an eye, I caught sight of three bodies upthrust in the air before they came crashing down. I thought I was seeing stars so I blinked my eyes and shook my head. I probably should have been running my imaginations deeper than expected, else how could I explain the sudden thudding of my heart and dryness of my throat?

The bus I was in moved too slowly it could pass for a slow motion skit. I saw the bright red liquid colour up the black tarred road. Blood.
The first body was a little baby who on a close up random guess could not have been more than 9 months old, lying with her back to floor, her bright red blood gushing carelessly from the back of her head. She was dead on arrival. She could not have survived the magnitude of the fall for a toddler of that nature, especially on a very hard surface as tarred road.
Adjacent to this body was a female adult who could’ve been her mother, laid on her back with her right leg missing. She wasn’t breathing, her blood was the only thing moving around her, spilling away in reckless abandon.
The third body was just a few paces from the woman and the baby. He could have passed for the driver of the motorcycle, for the motorcycle was squashed in a heap beside him. He laid unmoving in a pool of his own dark red blood with his face to the ground. Passersby flocked around the bodies, starring clueless.
The bus that collided with the motorbike was parked haphazardly to the curb a little distance further. The passengers got out one after the other, dusting off shards of broken glass from bodies, some of which got cut with bruises. The driver of that bus was nowhere to be seen.

I felt so nauseous and light-headed. The blood. The lifeless bodies. The collision. The survivors. The confusion. The building traffic. The screams and shrieks from the other passengers. Everything seemed to bring a sickening sensation to my stomach, laced with goose bumps spread over my outer skin and a fierce rush of adrenaline pumped into my blood vessels. I held my head to stop the spinning inside my head, then covered my mouth to keep myself from puking.

As gruesome as it seemed and looked, I’d never been mortified by the sight of death on a highway. The image hunted my senses all the way to my destination and days later.
One would most likely think that if only the gully hadn’t cut into the highway, I bet these unfortunate souls could still have been breathing by now. If only the state of the road had gotten more awareness from the government in charge, and possibly been sand-filled or stone-filled, this accident wouldn’t have been an incident.

All it took was a split fraction of a micro-second and the final destination on a highway became a gruesome account of a worst case scenario that would stay etched in memory.

No one wished for it. No one envisioned it. No one ever saw it coming. The final destination into the great beyond. 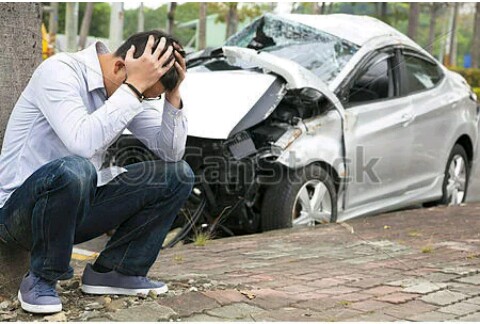