I once walked into a market in Lagos to purchase items. Deep in the middle of my task, I heard screams of thief, thief, thief ring out around me. My eyes focused and I presently understood the origin of the drama. A young man holding a lady’s purse was being pursued by hordes of people.

The thief was soon apprehended and a large crowd converged on the scene. I got there on time to observe the sequence of proceedings in this makeshift court and I now relate every detail to the reader.

The thief was caught by a burly athletic youth who now carried on in the manner of a revered judge. The crowd that converged was an angry one. Many of the youths bore sticks raised high, with which they commenced beating the thief.

The burly youth calmed the crowd and motioned the woman whose purse was stolen to speak. The woman put forth her accusations of the theft, taking up the roles of a plaintiff and lead prosecuting counsel concurrently. She narrated her ordeal in a rage and even stole an opportunity to kick the thief in the eye.

Several other witnesses were called and each related the theft from their vantage point. The most damning evidence was given by the last witness who pointed out that the thief had a knife, and had made attempts to use it while scuffling for the purse. This new piece of evidence further incited the crowd and shouts of beat am well well, make una kill am, rang out from the crowd. This as it turned out were the jury; for in such courts the jury is the entire crowd and the presiding jurors are those with the loudest voices.

The reader may note that this kind of court has an ingenuous contraption known as supporting witnesses, who do not take the main stand as prime witnesses, but support the main witnesses by interrupting with many damning side comments and contrived narratives.

The thief now made entreaties that he be heard. The burly judge remembering that the thief had a right to be heard calmed the crowd once more and invited the thief to speak. The thief realizing he was to be the only member of his defense counsel put on an aspect that drew sympathy from certain members of the crowd.

In his defence, the thief blamed a certain fellow called the devil for the deed; his exact words being na devil work. Throughout his defence the thief blamed the devil thirteen times such that the crowd became convinced the devil was a very dangerous criminal that they equally needed to apprehend. He equally blamed the government for failing to create employment for graduates like him and ended by informing the crowd that the theft was motivated by his lack of privations.

Providence chooses to visit where it pleases and the thief did not get any visit in his hour of need. A defendant rarely gets an acquittal in these roadside courts; such that despite his moving defence, cries of make una kill am rang out with renewed vigour from the jury. The burly judge realizing he’ll be unable to restrain the crowd any further released the thief to face his sentence.

One who has witnessed farmers using sticks to beat out seeds from the ears of harvested millet plants will better understand the scene that played out. The youths used the sticks to deal out death blows in a sickening frenzy, such that the whole scene became a repetition of thuds from the beatings, followed by splattering of blood and dying cries from the convict.

The onlookers took in the whole scene like vultures waiting for their prey to die completely. The beatings stopped less abruptly than they had begun and each of the youths who had taken part left the scene quietly, yet with shoulders raised like heroes returning from a great battle. The thief now barely recognizable, lay sprawled on the floor in a murky pool of his own blood, dead.

NB: Eleven purses including mine were stolen during the proceedings related above. We await the apprehension and trial of the thieves.

Written by Theophilus T. T. Amenger in jarring memory of the Aluu 4 victims. 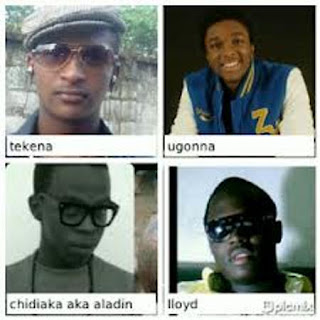